What role do the youth play in effecting nonviolent social change and why? 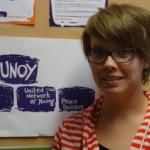 Thank you for sharing Albert, it is indeed a very interesting development.  As I understand from your story and the link on Al Jazeera, it also addresses a very pressing global issue here: the rapid growth of unemployed youth. These types of NV organizations are a clear expression of their discontent. The question is, though, how can we as youth organisations prevent this discontented youth from resorting to violent means? Do you have any ideas on this?

sorry for joining in so late - i enjoyed reading the above comments and there is a lot to take in from the rich experiences that everyone is sharing.

my two cents on this topic is mainly around defining and non-defining terms. I work mostly with young women activists and I feel in a lot of ways and especially a few years ago when the term 'youth' had not exploded on the international development agendas yet, that youth groups were working together without identifying as 'youth' or 'young women'. It was their work that defined their scope and vision whether it be working sexual rights or access to health or political representation. However, there was a shared feeling amongst youth that their experiences were different and that there was a resistance to what Ruth and the New Profile are trying to acheive and that is multigenerational collaboration. That young people were seen as inexperienced and did not have the capacity to be in decision making bodies and spaces. I believe that now and especially in the context of regional uprisings and the economic crisis, youth have been given more attention and space but not necessarily enough support for meaningful participation. I believe in a lot of ways that youth are being used as representatives of a certain cause and not necessarily being engaged - its like having a seat at the table but not being taken into account.

As per the role of youth in the MENA region uprisings, i feel similarly in that while they were integrally involved in the planning, organizations and execution, there is little space to be involved in constitutional reform and participation in parliment. young women especially face greater discrimination as they are women and are not seen as active constituencies of the state but rather as dependents of the state. I know many young women feminists are working on pushing more young women to be involved in politics including NAZRA in Egypt and Nasawiya in Lebanon who are doing great work in trying to infiltrate political processes and increase young women political participation.

What drives them to stand up and make a difference?

Social media has facilitated spreading what happens around the world . Anyone now from her/his home can follow the recent news in any part of the world .

when young people hear or see what is happining in different area such as some people finally have gotten their freedom or reached their goals , they become inspired  by thses changes and achievements and want to change their reality .

young people use social media to contact with each other , because it is easier and saves time and money , and these factors help young people to follow the recent variable news and enable poor people from being a part of making the change .

young people now arrange and prepare for the demonestrations and stricks via FB and twitter both easliy and rapidly , because of that , we have witnessed many demonstrations happen in short time and they are well- ogranized , crowded and contained all segments of society .

young people hope to change their reality and their social conditions and try to end suffering and marginalizing  that they live in by any instrument .