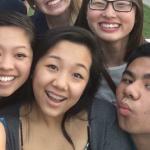 Angela Vang is a junior at Central High School in St. Paul, Minnesota and is currently a candidate for the International Baccalaureate diploma. She will graduate as a part of the class of 2016. On campus, she serves as secretary chair for the student government which has allowed her to work with community partners such as the local chapter of the Red Cross. She is involved in the school's International Affairs Club that combines Amnesty International with Great Decisions and is an active member of a variety of other student-led organizations. She has also taken part in the annual conference for SHE, hosted at the University of Minnesota, promoting empowerment amongst young women.

Since 6th grade, Angela has been enrolled in Breakthrough Twin Cities, a nationwide college readiness program working to close education opportunity gaps for under-resourced students starting in early middle school and continuing through senior year. Since the start of highschool, she has completed 2 internships with the organization, working alongside colleagues and community leaders also passionate about closing the achievement gap. Her involvement with the program has given her the opportunity to participate in other leadership initiatives including Students Today Leaders Forever. Over the duration of the next year, she will be working with Youthprise, a local non-profit, as a part of their Change Fellowship program to develop her own funded project focused on engaging communities and accelerating learning outside of the classroom. Her project involves designing an online magazine publication focused on exposing youth voice on the topics of culture and social justice through different forms of expression. In hercommunity, she is an advocate for multiple causes and has participated in campaigns for reproductive rights, educational justice, racial equality and solidarity in Ferguson. She hopes further her involvement with human rights and social justice movements as she transitions into into her senior year and on to post-secondary education.