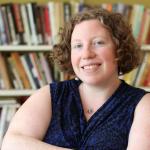 Cara is an innovative strategic thinker working across a variety of disciplines to build the capacity of communities to create meaningful and lasting change.  Before joining the team at Press Pass TV in 2008, Cara founded the Youth Media Institute at Project: Think Different (now amplifyme) and also ran Digital Media programming for the United Teen Equality Center (UTEC). She holds a Doctorate in Educational Leadership and Change in addition to a MA in Transformative Media Arts and a BA in Screen Studies and Urban Development/Social Change.

In addition to time spent on the Adjunct Faculty at Wheelock College and UMASS Boston, Cara has guest lectured at Worcester State University, Northeastern University, MIT, Simmons College, and Amherst College. She has produced programming for MTV & NBC, and has provided training in media and social change to non-profit leaders like Oxfam and Facing History & Ourselves. Cara has also presented at several conferences, including the Women, Action and Media Conference, the Be the Media Conference, the National Conference for Media Reform, and the Action Coalition for Media Education Conference. She is the recipient of the Empowerment Award from the 2008 Media That Matters Festival, is featured in No Excuses: Nine Ways Women Can Change How We Think About Power by Gloria Feldt.

Cara’s first book By Any Media Necessary, a guide for engaging youth in change through media is available at byanymedianecessary.com, and you can read her work in the Kinder Braver World Series, published by Harvard University’s Berkman Center for Internet and Society in partnership with Lady Gaga’s Born this Way Foundation and the MacArthur Foundation. She is the Vice-Chair of the Human Rights Commission in Worcester, Massachusetts where she resides with her husband and daughter.