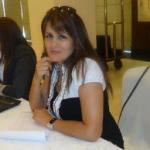 Mrs Ajeilat holds A.A. in Interior Design from the American InterContinental University in London, and B.A. in Business Administration from Mu’tah University in Jordan.

She has worked in three public universities, two of which (Al al-Bayt and Al Al-Hussen Bin Talal) were during their establishment period.  She was section head at the liaison office of Mu’tah University and Al Al-Hussen Bin Talal University in Amman, responsible of four tasks at same time; supervisor of president’s office, supervisor of liaison office, director of foreign affairs and secretary of the board of trustees.  At Philadelphia private university, she sat up an internal quality assurance system that was endorsed by the concerned councils in the university. She assisted the business administration and law schools in their preparations for the external review carried out by the UK Quality Assurance Agency for Higher Education QAA, through Al Hussein Fund for Excellence assessment projects. She also worked as part-time QA Consultant for the local and regional institutions; Middle East University, Council of Quality Assurance and Accreditation of the Association of Arab Universities, and the Arab Organization for Quality Assurance in Education.

Mrs. Ajeilat worked as general manager of Al Hussein Fund for Excellence HFE.  She joined special subject review courses at the QAA in Gloucester. She held orientation sessions for UK and US peer reviewers on Jordan HE context. She signed a MoU with the Center for Quality Assurance in International Education CQAIE in the States.  She prepared ToR for the review programme, project consultants, chairs and reviewers. She organized for a strategic planning for quality assurance SPQA in HE in collaboration with the CQAIE. During her work at HFE, the number of participating universities in external reviews has increased from 5 to 20, and managed to organize for 6 programme reviews, one follow up and SPQA project in three years.

Mrs. Ajeilat is a member of Jordan Transparency Center (JTC). JTC is a Non-Governmental and Not-for-Profit Organization aiming at enhancing transparency, democracy and good governance, and at fighting corruption through civic participation and monitoring.  Inspired by the Agreement of the United Nations Convention Against Corruption (UNCAC), that was signed by Jordan in early 2005, and by Transparency International (TI), that is based in Berlin/Germany, JTC was founded on July 11th, 2011, registered at the Ministry of Political Development, and formally launched on Feb 12th, 2012 by a group of enthusiastic Jordanian volunteers.  Mrs. Ajeilat was elected chair of its board of directors in Feb 2012.

At the regional level, Mrs. Ajeilat was elected as secretary of the board of the Arab Organization for Transparency and Integrity, which was established in March 2012 in Doha.  She participated in relevant local, regional and international events. She is also a member of the Jordan Economy Compact.

Mrs. Ajeilat is a member of the economic policy development forum chaired by Dr. Talal Abu Ghazaleh since Oct 2012.