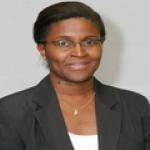 In 1985, Ms. Doumbia graduated from Excelsior (then Regents) College. Then, she went back to Africa and attended the School of Business Executives of the Ivory Coast and obtained a graduate degree in business administration. Her experiences include being president of one of the largest women’s associations of West Africa, the International Women’s Association of the Ivory Coast whose main goals include education and the health of women and children and being appointed Head of the Communication Commission for Amnesty International Women’s Network in the Ivory Coast.