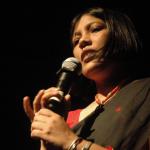 “What I fight for is not just to teach people dance, but make them strong individual in society with dignity and self respect”

Sohini Chakraborty, Ashoka Fellow, Sociologist, dance activist, Founder Director of Kolkata Sanved. Sohini uses dance movement as an alternative tool for  therapy , recovery, rehabilitation and self expression for mainstreaming survivors of trafficking and violence.  She received prestigious ‘The Dian Von Furstenberg Award’ on 2011 to transform the lives of other women.  Over 15 years Sohini experimented with breaking the barriers of traditional dance and introduce Dance Movement Therapy as a tool to provide fresh approach in South Asia where it is very unique and pioneering concept.  The success of Sohini’s work led to the establishment of Kolkata Sanved in 29th April 2004- that pioneered the use of dance movement therapy as a tool for psychosocial rehabilitation. The organization is trying to establish itself as a center of excellence in the field of dance therapy in South Asia. Under her leadership Kolkata Sanved received Beyond Sport Award 2009 for “ Best Project for Health”. She also received the ‘Newsmaker 2012’ award by 24 ghanta ( leading news channel of West Bengal) for outstanding achievement and inspiration.