In 1999, the International Centre for Cultures and Languages (Internationales Zentrum für Kulturen und Sprachen) in Austria developed a program that pairs police officers with an immigrant or refugee to foster positive relations between the police force and the foreign-born population. While educating the officers about citizens who they may have held negative stereotypes about, this program also gives the refugees and immigrants an opportunity to communicate with the officers about racial profiling and other racial issues. 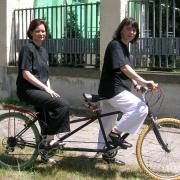 The International Centre for Cultures and Languages (ICCL) in Vienna adapted the “TANDEM®” program—originally created for language learning— to human rights education with police and migrant populations in a unique and profound way called “Intercultural-TANDEM®” to provide a unique and applicable model to improve intercultural understanding.