In 2001, the KWWAU conducted a nation-wide campaign to raise the minimum wage by making recommendations to the South Korean government and prosecuting the businesses that violated the minimum wage system. During June and July of that year, over 15,000 people signed the petition. The KWWAU conducted a survey on the condition of 528 subcontracted women working as cleaners in 107 companies in nine cities. Through the survey, it emerged that 23% of the workers surveyed received less than the minimum wage (421,490 KRW /$409 US per month).

People’s Solidarity for Participatory Democracy (PSPD) worked with a coalition of civic organizations to establish criteria by which to identify corrupt politicians and to campaign against those politicians in order to improve citizen involvement and politician responsiveness in South Korea.

The city government in Seoul, South Korea, has created an online database to increase government transparency. Online Procedures Enhancement for Civil Applications (OPEN) allows city residents to monitor details of civil applications related to 70 municipal government tasks that have been identified as the most prone to corruption, including housing and construction projects, environmental regulation and urban planning. 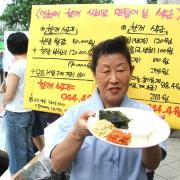 The Korean Women Workers Associations United (KWWAU) effectively engaged the media in their efforts to make changes to the minimum wage system in Korea. The low minimum wage had become an urgent problem, particularly among subcontract workers in South Korea. KWWAU organized a nation-wide campaign in nine cities, resulting in the first challenge to the Korean minimum wage system since its inception in 1988.