Beginning in 2001 Elkarri held a massive signature drive in which they asked people to sign a document demanding the initiation of a dialogue of peace between all parties in the Basque region. Since its inception, Elkarri had been building a database of people who wanted to be involved with their activities, so in addition to collecting signatures at their events, they also contacted these people for their support. Elkarri also asked each person for a donation of about US$7 and to volunteer their time. To date 123,000 citizens have signed the petition, 10,000 people have become Elkarri volunteers, and over US$200,000 has been donated. In addition, representatives of all political parties, except the Partido Popular of Spain, have signed the document. 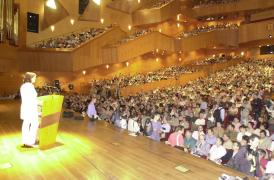 Elkarri, a group based in the Basque Region, has used a form of dialogue they call social mediation to encourage the broadest possible participation from all arenas of society to discuss solutions to the conflict. Community members were given a broad choice of ways to get involved: from signing a petition to becoming a member to participating in and organizing discussion groups. But however people chose to participate, they learned that they had a role to play in mediating the conflict that affected their lives and created pressure on the groups in conflict to make steps toward seeking peaceful resolution.