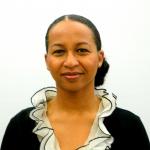 Amel Gorani is an international development and inclusion specialist with a focus on countries in and emerging from conflict. Amel is the Director for the Center for Community and Civic Engagement at Carleton College in Minnesota, USA.

Before joining Carleton, Amel served as inclusion coordinator and advisor to the Centre for Humanitarian Dialogue (HD), an international peace mediation organization based in Geneva, Switzerland. Her work for HD focused on promoting the inclusion of civil society actors in peace processes in the Middle East, Africa, and Asia. She has also worked for international development agencies, non-profit organizations and philanthropic foundations in Africa, Europe and the United States.She has served as Senior Advisor for Vulnerable and Marginalized Groups at the USAID- Sudan Mission and as Program Officer at the Open Society Foundations’ International Women’s Program and the Swedish International Development Agency Somalia and Sudan programs.

She also served as Executive Director for Sudan Future Care – Amal Trust, an NGO working in war-affected areas in Eastern Sudan. Amel has worked on several countries acrossvarious regions, most extensively on her native Sudan and the countries of the Horn of Africa. Her work has focused on international development, human rights and peace and conflict including issues such as inclusive peacemaking and sexual violence in conflict. She has also worked on migration, integration and anti-discrimination issues, mostly in Sweden where she lived for many years.