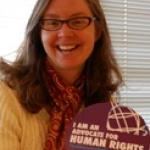 Amy Bergquist is a Staff Attorney in the International Justice Program at The Advocates for Human Rights. Prior to joining The Advocates, Amy clerked for the Honorable Ruth Bader Ginsburg, Associate Justice of the U.S. Supreme Court, the Honorable William A. Fletcher of the U.S. Court of Appeals for the Ninth Circuit, and the Honorable John R. Tunheim, District Judge of the District of Minnesota. Amy also worked as an Associate at the law firm of Faegre & Benson, LLP in Minneapolis.

As Staff Attorney for the International Justice Program, Amy coordinates advocacy at the United Nations and regional human rights bodies. Her substantive areas of focus include LGBTI rights and discrimination based on sexual orientation or gender identity, rights of minorities and non-citizens, and the death penalty. She also collaborates with diaspora communities seeking to be more effective advocates for human rights in their country of origin or ancestry, and coordinates pro bono legal assistance to support non-governmental organizations based in Africa that work on human rights and rule of law issues.