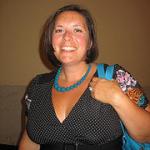 Holly has spent her entire career helping do-gooders do better.

Holly has served as long-time communications counselor to the Evelyn and Walter Haas, Jr. Fund, and enjoys working with the Ms. Foundation for Women as well as a range of community foundations across California. Her work has been honored by the Council on Foundations for Excellence in Public Policy Communications.

Holly was named by PR News as a creative practitioner in the industry. She was editor of “Loud and Clear in an Election Year,” a guidebook created to help nonprofits convey their messages in the crowded election environment. She is a frequent speaker for nonprofit and academic audiences alike, and her efforts to launch the LightBox Collaborative were featured in Chris Guillebeau’s recent business book The $100 Start Up.

Holly co-created and serves as advisory board chair of The SPIN Academy. This  important communications training and talent-development effort grew out of the SPIN Project, of which Holly was director.

Holly’s experience also includes her work at Spitfire Strategies, where she created communications programs for grantees of the nation’s largest foundations. Holly started out as press secretary for the Sierra Club, alternately doing battle with and cozying up to the Washington, D.C. press corps. She was primary contact for the national media, and created national, regional and local campaigns.

Holly serves on the board of directors for the Ella Baker Center for Human Rights and the Center for a New American Dream. She is a proud past board member of the San Francisco Bicycle Coalition, Young Nonprofit Professionals Network, and the Green Media Toolshed.

Because she wanted to be an English teacher when she grew up, Holly holds a B.A. in English literature and language from the University of Southern California. She lives in San Francisco with her good-humored husband, their snoring dog, and a few harmless dust bunnies.