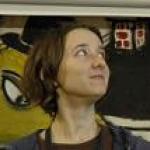 Janelle Treibitz began her career studying theater in New York City. She quickly turned to community organizing when she moved to Memphis, Tennessee in 2004 and worked with the Mid-South Peace and Justice Center on voter registration and reform. For the past five years she has spent her summers working with Bread and Puppet Theater, a 40 year-old radical puppet company based in Glover, Vermont. In 2006 she moved to Washington, DC and began combining her puppetry and organizing skills, working with various organizations and campaigns to create puppet shows, street theater, creative popular education tools, and creative direct actions. She has worked with Organizing Neighborhood Equity DC (ONE DC), the DC Grassroots Empowerment Project (Empower DC), Mexicanos Sin Fronteras, Tenants and Workers United, Teatro Indígena (Chihuahua, Mexico), and the Anacostia Watershed Society. She has been actively organizing in her neighborhood, helping found a community group called Hear Mount Pleasant. They deal with race and class tensions in Mount Pleasant’s diverse community through cultural events and neighbor-to-neighbor organizing. She is also a long-time waitress and currently works at the Tabard Inn Restaurant in DC. She has a BFA in Theater from New York University.