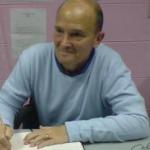 I was born and reared in East Belfast in an area known as Ballymacarret. My parents were both hard working, from the Protestant /Unionist tradition. I was the second eldest of five sons. My Father served his apprenticeship as a sail maker, a trade that became defunct in the late fifties or early sixties. As a result, my early school years were punctuated with moves from home to home while my Father searched for work. But generally we were raised under the shadows of the giant cranes and gantries of the Harland and Wolff Shipyard, where the most famous ship in the world “The Titanic” was built in 1912.

At the age of ten my family moved to the Ballybeen Estate, a sprawling working class housing estate in Dundonald, about six miles from the centre of Belfast on the east side. It was a great place for a young boy to grow up, with plenty of green fields and open spaces. I left school having turned sixteen, with no qualifications, and began to serve an apprenticeship as a plumber. My only real interest up to then had been in football and I had high hopes of a professional career, having come to the attention of one or two English League clubs including Arsenal and Portsmouth. My small stature and slight build obviously went against me. But hey what did they know?

At 17 years old I became a member of the junior wing of the Ulster Volunteer Force, a proscribed paramilitary organisation opposed to violent Irish Republicanism. By 19 years of age I had become a sworn member. I was married at 21 years old and a year later became a father to a beautiful daughter, Nichola. In 1981, I became heavily involved in the U.V.F. during the time of the Hunger strikes when there was enormous tension. As a result of my involvement I was charged in November 1982 with a list of crimes including murders, attempted murders, conspiracy to murder, armed robberies, bank robberies, possession of weapons, possession of explosives, basically a whole litany of crime.

In the summer of 1985 I was sentenced to four life sentences, and a total of 357 years for all my other offences combined. I was taken to the H Blocks of Long Kesh, the Maze Prison. I was released in 1998 under the terms of the Good Friday Agreement, having spent a total of 16 years in prison. During my sentence I was divorced from my first wife and in 1990 met the girl who would go on to become my second wife, we were married during a ten day parole on Christmas Eve 1996.

In 1999 I took a job working in East Belfast with young people at risk. These young men reminded me of myself at that age and I tried to dissuade them from travelling down the same road as I had trod. In 2000, I secured a job working on the Shankill/Falls/Springfield Roads Interface with “Interaction Belfast” and have been here for seven years now. I love the work I am involved in and I know it is making a difference to the quality of life for people living on the longest Interface in Belfast.