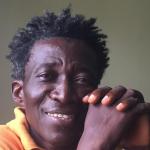 LESLIE LUMEH WAS BORN IN DAMBALA, CAPE MOUNT COUNTY IN LIBERIA BUT HAS LIVED AND WORKED IN THE CAPITAL CITY FROM AN EARLY AGE. HE IS A SELF-TAUGHT PROFESSIONAL WHO HAS MADE REMARKABLE STRIDES BOTH LOCALLY AND INTERNATIONALLY OVER THE 23-YEAR SPAN OF HIS CAREER AS AN ARTIST, ILLUSTRATOR, CARTOONIST AND TEACHER, WITH MANY BRILLIANT ART PROJECTS TO HIS CREDIT.

After a civil war erupted in Liberia in 1989, Leslie moved to the Ivory Coast, where he spent nearly a decade living in Abidjan. Today this celebrated Liberian is a regional presence in West Africa, having contributed to a number of creative projects launched in Ivory Coast, Sierra Leone and Gabon. Returning to his native Liberia in 2005, Leslie has continued to be innovative in all the artistic disciplines, opening and operating his Art of the Heart art gallery in 2008, a first of its kind in the capital city. After operating the gallery successfully for three years he then moved on to establish the Liberian Visual Arts Academy (LivArts) in 2010. The school’s programs currently provide free art education to Liberian youths of all ages with support from several sponsors.

Lumeh’s talent has also travelled to the United States. While visiting a family friend there in 2012, he was invited to Florida where he gave lessons on book illustration to children at the Children’s Reading Center in Palatka. Most recently Leslie was chosen to represent Liberia in a prestigious and historical first of its kind project titled “Lumieres d’Afriques”, which is showcasing the work of one artist from each of the 54 nations of Africa.  The exhibition began in Paris, France, last November and has now begun a tour of several major cities around the world, opening in Abidjan in April 2016, where Leslie’s work, titled “The Light Within”, is on show. Three of Leslie’s paintings are in the collection of the Art in Embassies program, a United States of America public-private partnership that promotes cultural diplomacy through exhibitions.

On his style, Lumeh has stated that he takes his inspiration to paint from scenes in the daily lives of Liberians from all walks of life. His unique creation of suggestive imagery is neither exact or precise yet provides all necessary elements for the viewer to know exactly what is presented. This approach has been described by critics as somewhat romantic, for what appears to be a simple mode of execution, on closer examination, reveals an intricate mastery of colour and design, coupled with subtlety and dexterity in his brush and palette knife technique.

Leslie holds a diploma in Architectural drafting from the Booker Washington Institute in Kakata, Liberia.