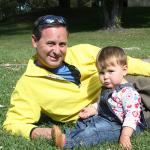 Dr. Martin Benjamin (martin at kamusi dot org) is the founder and executive director of the Kamusi Project, an international collaborative effort to produce learning and lexical resources for African languages. He received a doctorate in Anthropology from Yale University for research on health and development; his dissertation, Development Consumers: An Ethnography of the ‘Poorest of the Poor’ and International Aid in Rural Tanzania, the culmination of extensive multisite field research, was awarded with distinction in 2000. He has since conducted applied research in Tanzania on health and gender, particularly issues of maternal health and anemia, with support from UNICEF, Danida and the Micronutrient Initiative. He also taught Anthropology and Swahili at Wesleyan University in the US until 2006, before leaving the academy to pursue the development of the Kamusi Project full time.

Benjamin founded the Kamusi Project in 1994, when he was a graduate student looking for dictionary resources to aid his learning of Swahili. He conceived of a participatory model in which community members shared the tasks of creating a comprehensive Swahili dictionary, entry by entry. With the support of grants from the US Department of Education and an inter-university Consortium on Language Teaching and Learning, the Kamusi Project grew into the world’s most-used resource for the Swahili language, with more than 60,000 entries and over a million lookups per month. In 2007, as the Kamusi model expanded to cover additional African languages that fell outside of the core university teaching mission, Yale released the project to the World Language Documentation Centre, a UK-based public charity. Subsequently, Benjamin shepherded the project through the process of formation as two independent legal non-profit entities, Kamusi Project USA for activities that originate in the US, and Swiss-based Kamusi Project International for working with partners worldwide. (Read more in a profile by the Hartford Courant and this profile in Columbia College Today.)

During the past five years, Benjamin has led several new undertakings for the Kamusi Project. He is the primary investigator on a grant from the National Endowment for the Humanities for a trilingual dictionary among Kinyarwanda (the language of Rwanda), Swahili, and English. He has also been an active member of the African Network for Localisation, where, with the support of the Canadian International Development Research Centre, he has managed projects to create computer locales for nearly 100 African languages, and to create comprehensive software localization terminologies for a dozen languages. He has also worked with Microsoft to refine their Swahili technology glossary and their translations for Windows 7 and Office 2010, and he is leading a new effort to create an international standard for participatory terminology development.

Benjamin is currently focused on two major activities for the Kamusi Project. The first is the Pan-African Living Dictionary Online, which will be a major lexical resource that interlinks numerous languages of Africa. The second is KamusiTERMS (Kamusi for Technology, Economy, Rights, Medicine, and Science), which will be a multilingual, multi-domain term bank for African development. These projects involve the coordination of numerous partners throughout Africa and elsewhere, including software developers, language experts, and domain specialists. Benjamin resides in Lausanne, Switzerland, with his wife Veronica and infant daughter Nicole, and travels frequently to pursue Kamusi Project activities with partners around Africa.

Among his many projects for the Swahili language, Benjamin is co-author of the Lonely Planet Swahili Phrasebook (2nd edition) and sole author of the Lonely Planet Swahili Phrasebook (3rd Edition). He did extensive translation work for the World Bank Indigenous Knowledge Program. He was the main translator for the original Google Swahili localization that serves as the backbone for Google Kenya. In 2011 he was recognized by the Microsoft Local Language Program "for outstanding contributions to the release of Windows 7 and Office 2010 in Kiswahili".

Benjamin writes the Kamusi Project Editor's Blog, though he posts updates far less often than he would prefer. An avid photographer, he keeps an active photostream documenting his family, travels, and attempts at art.