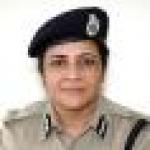 Nina Singh is an officer of Indian Police Service (IPS), the premier police service of India. She joined the IPS in 1989 and is currently posted as Inspector General of Police (Planning and Welfare) at the State Police Headquarters, Jaipur. Her responsibilities include resource management, modernization and welfare of state police. She has worked in various assignments across the state and acquired in-depth knowledge of police administration, crime investigation and maintenance of law and order. She has also worked as Member-Secretary of Rajasthan State Commission for Women, a watchdog to protect the rights and interests of women- especially those belonging to economically and socially disadvantaged sections of society. She has been closely associated with the police reform initiatives of Rajasthan. She did her MA from Jawaharlal Nehru University, New Delhi and MPA from Harvard University, USA. She has acquired special skills on evaluation of social programs at Massachusetts Institute of Technology (MIT), USA. She has been decorated with the Indian Police Medal for Meritorious Services. She is recipient of the Indira Gandhi Priyadarshini Award for outstanding contribution to the society and Nari Shakti Samman for being a symbol of womanpower.