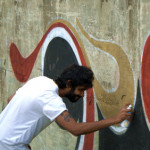 Sidd comes from backgrounds in the visual arts and social sciences, having spent several years prior to joining fD, working with community arts projects in New York, India, China and co-founding an artist residency/exchange program in Southwestern China, focused on ethnic minority cultural preservation in the China-Burma borderlands. Sidd has an MSc in Sociology from the London School of Economics and Political Science with concentrations in Crime, Control and Globalisation, Cultural Theory and New Media and a B.A. in Sociology from New York University. His paintings, installations and experimental films have been seen in the United States, Canada, India, the Philippines, China and Northern Ireland. He is a co-founder of Zero Capital Arts, which supports low-cost socially and politically engaged creative projects and exhibitions.