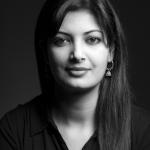 Smita Sharma is an Indian photojournalist and documentary photographer based in between New York and Kolkata. Her work has been published in various media outlets including CNN, Washington Post, Caravan Magazine among others and exhibited and screened in various countries including USA, France, Cambodia, South Korea, Saudi Arabia, UK and Myanmar. Her ongoing project on Sexual Violence and Rape in India was exhibited as part of CSW-59 at the United Nations Headquarters in New York earlier this year.Besides her freelance work, she is currently teaming up with National Geographic photographer Stephanie Sinclair, adding voice to the global campaign on child marriage at - Too Young To Wed.  She has led the organization’s global social media outreach, increasing the audience engagement across different social media platforms. She is the recipient of National Silver Karamveer Chakra and PVCHR Bronze Karmaveer Chakra for Protection of Human Rights( 2014-2015)  at REX CONCLiVE at New Delhi, India.    www.smitasharma.com