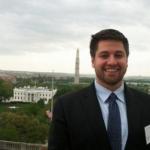 Tyler Jess Thompson is an American attorney, Policy Director for United for a Free Syria, and Policy Advisor for the Coalition for a Democratic Syria. For five years, Tyler served as legal counsel at the Public International Law & Policy Group, where he directed their ceasefires practice area. Tyler served as a legal and strategic advisor to the Syrian Coalition at the Geneva II Peace Conference, and has advised multiple components of the Syrian Opposition since summer 2011. He is a legal advisor to the "Caesar" torture evidence file. In 2012, Tyler was based in Tripoli, Libya where he designed and implemented transitional justice studies and trainings with the Libyan Lawyers Association and Libyan Ministry of Justice. He also ran training programs and provided legal and policy guidance on ceasefires, peace negotiations and post-conflict governance to governments and opposition movements in Syria, Libya, Egypt, Yemen, Kosovo, Burma, and South Sudan, among others. Tyler managed PILPG's offices in Tripoli, Libya and Pristina, Kosovo.