Does a Nobel Peace Prize Change a Person?

The answer is “no” if that person is Kailash Satyarthi. His exuberant child within shines forth as strongly today as when I first had the honor of meeting Kailash-ji in 2003 in New Delhi along with his team in Bachpan Bachao Andolan (Save the Childhood Movement). 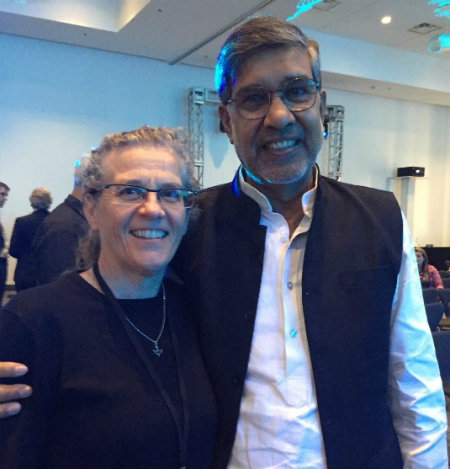 I’ve had the opportunity to connect and work with Kailash-ji and his team since 2003 when he had joined our CVT-New Tactics in Human Rights Working Group and assisted us with preparations for our 2004 International Symposium. The Symposium brought over 450 human rights activists from 89 countries around the world to Ankara, Turkey to share strategic and tactical innovations in human rights including Kailash-ji’s innovations to combat child labor. Kailash-ji is a master strategist and tactician. The proof is in his ability to see and make concrete steps to achieve his vision for a world where every child enjoys their childhood – where they laugh, weep, learn and have the opportunity to reach for their own dream.

Does the Nobel Peace Prize help to advance important work?

I would have to say the answer to that is “yes”! Although I want to make clear that his important work to stop all forms of child exploitation would continue regardless of receiving the Nobel Peace Prize. After all, Kailash-ji has been doing the work since 1980 without such recognition. However, the Nobel Peace Prize does make resources and opportunities available to share and expand the work that may not have been present before the award. For example, the Peace Prize made it possible for Kailash-ji and his team to be the honored guests at the recent Nobel Peace Prize Forum in Minnesota, USA, giving me the wonderful opportunity to meet him again.

The Nobel Peace Prize provides an acknowledgement of his unwavering focus to make his vision a reality for all children. Kailash-ji has been constantly identifying strategic goals and innovating tactics to move his organization, community, nation and the world toward that vision. Kailash-ji has utilized the full range of strategic tactical aims: prevention, intervention, restorative (rehabilitation), and promotion of human rights cultures and institutions to protect childhood. BBA has formed partnerships and coalitions to launch ideas and then releases them to take on a life of their own.

I want to share just a few of Kailash-ji’s ground-breaking innovations:

The first began in 1980, when Kailash-ji and a small group of people were compelled to intervene when they learned of a forced child labor situation. They carried out the first ever rescue of 15 year old girl, Sabo, and 34 other bonded laborers. This was the beginning of BBA’s intervention tactic to rescue children from all forms of exploitation. To date, over 87,000 children have been rescued, and through BBA’s other work, they have prevented thousands of others from being exploited. While BBA leverages existing constitutional provisions, it also promotes legislative policies to ensure and advance the fundamental rights of children.

It didn’t take long for Kailash-ji to recognize that these rescued children required restorative measures to regain their childhood. The Mukti Ashram, was the first transit rehabilitation and education center established for bonded child laborers. Mukti Ashram has emerged as a model for providing short-term immediate support and access to services for children rescued from child labor and trafficking. BBA’s Bal Ashram, established in 1998, serves as a long term rehabilitation, education and training center.

In 1989, Kailash-ji, with former child laborers, launched a network of more than 750 civil society organizations, the South Asian Coalition on Child Servitude (SACCS). The coalition promoted a child labor free society by marching across India, and now marches across the world through the establishment of the Global March Against Child Labour.

Kailash-ji did not stop at building awareness, BBA created the Bal Mitra Gram (Child Friendly Villages) model to promote villages that honor childhood by ensuring the participation of all the villages’ children in education and serves to prevent child labor and child trafficking.

In 1993, Kailash-ji introduced the first ever social labelling to prevent child labor – Rugmark, to certify child labor free carpets. BBA built awareness among a different constituency (consumers) to understand their role in the prevention of child labor and a call to take action by making responsible choices to impact the supply chain. Now known as GoodWeave, this was replicated in many countries as a new corporate social responsibility and ethical trade tactic.

Now, with almost 40 years under his belt in the battle against child exploitation, Kailash-ji is not even close to resting on the laurels of his Nobel Peace Prize. CVT and our New Tactics in Human Rights program celebrate his many contributions honored by the Peace Prize recognition and we are grateful for the opportunities to work together with Kailash-ji over the years. He is an inspiration to me and so many as he nourishes his inner child and lights the way to new innovations to reach that world where every child enjoys their childhood.