A Call to End Corruption: One Minute of Darkness for Constant Light 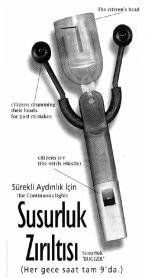 This deceptively simple tactic carried out in a mass numbers sent a powerful signal that the public was calling for an end to corruption in Turkey.

Using smartphones to advance safety and protection in public places
Women Making Peace: Mobilizing Ourselves Against the War
Taking on Our Own Defense: The Chiapas Network of Community Human Rights Defenders
Plan B: Using Secondary Protests to Undermine Repression
A Call to End Corruption: One Minute of Darkness for Constant Light
END_OF_DOCUMENT_TOKEN_TO_BE_REPLACED