The Dilemma Demonstration: Using nonviolent civil disobedience to put the government between a rock and a hard place 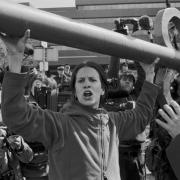 When the Canadian government refused to make public draft documents in their negotiations over the Free Trade Agreement of the Americas, Operation SalAMI organized hundreds of citizens to show up holding “Search and Rescue Warrants” for the release of these draft documents. The government responded by arresting one hundred citizens for requesting their right to information.  In response the media and general public demanded to know what the government was trying to hide. Behind the success of the campaign was a strategy that included a number of common tactics, including petitions, letter writing, etc., but with the added twist of an unequivocal ultimatum, civil disobedience and the drama of the Search and Seizure Operation, a type of nonviolent direct action. Operation SalAMI’s dilemma demonstration tactic, as part of a broader nonviolent campaigning strategy, pressured the government to act according to its professed values and at the requests of its citizens.

More ways to reach your tactical goal of resisting and disrupting abuse:

Violence against Women: Advocating for Legal Reform
Tactics for Combating Militarisation
The Dilemma Demonstration: Using nonviolent civil disobedience to put the government between a rock and a hard place
Women Making Peace: Mobilizing Ourselves Against the War
Plan B: Using Secondary Protests to Undermine Repression
END_OF_DOCUMENT_TOKEN_TO_BE_REPLACED