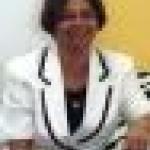 Glenda was appointed in 1995 by President Nelson Mandela to serve as a commissioner on the South African Truth and Reconciliation Commission under the chairmanship of Nobel Peace laureate Archbishop Desmond Tutu, she served on the Reparation and Rehabilitation Committee. Until recently, she served as the Director of the Desmond Tutu Leadership Academy. Currently, she is an independent leadership consultant and facilitator, providing an extensive executive coaching programme and works to assist leaders, particularly women in leadership positions, to be more effective in their roles.

Glenda has been involved in human rights advocacy since the early 1980s, working particularly with political prisoners in South Africa and Namibia, their families, exiles and orphaned returnee children. In 1998 she worked at the World Health Organization (WHO) at the Headquarters in Geneva examining the role of health workers in transitional societies. On behalf of the African National Congress(ANC), she co-chaired the placement board that facilitated the integration of all military health personnel into the national defense force (SANDF) and was involved in numerous structures to facilitate the transition to democracy in South Africa including the Transitional Executive Council (TEC). Her special interests are violence, trauma and torture rehabilitation, women and children in armed conflict, health workers and their contribution to post war reconstruction and impunity, truth and reconciliation. Glenda is a registered nurse, midwife, psychiatric nurse (specialising in child and adolescent psychiatry), community nurse practitioner and nurse educator. She is also a mother, sister, daughter and aunt, with interests in the arts, particularly choral music, and she trained as a classical singer. She is a member of the Cape Town Symphony Choir.