Join New Tactics for a podcast conversation on the potential of podcasting in human rights activism and the power of narrative storytelling. Hosted by Gianna Brassil.

Social networking tools have revolutionized the way that social movements and human rights advocates operate. In a world where the public creates the news in real time and information is readily available in a moment’s notice, the process of communication and dissemination has been largely democratized. Individuals can magnify their voice, not only through information consumption and generation, but through active engagement and organizing. For example, activists of the 2014 Umbrella Revolution in Hong Kong used a mesh networking tool, traditionally used at music festivals, to communicate. 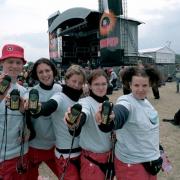 Amnesty International-Netherlands recognized the power of text-messaging technology (also known as short-messaging service, or SMS) to attract new members, build awareness of the campaign against torture and engage new people - particularly YOUTH - in quickly responding to cases of torture through Urgent Action appeals. The initial result was 520 new members gained directly from SMS participation with over 5,000 additional people becoming active in the SMS urgent action campaign. This case study puts special emphasis on how Amnesty took advantage of SMS technology to build a new constituency among young people.

Forum Asia worked with the Royal Thai Police to promote community-oriented and human rights friendly policing in Thailand and other countries in Asia. They utilized the introduction of a unique, computer based police training education program to engage and enlist the support of key leadership of the Royal Thai Police to champion the training tool. The computer-based police training program was a valuable tactic within their strategy serving to build mutual trust, acknowledgement and support while also helping police to more effectively address their immediate day-to-day policing challenges making the police better aware of human rights as well as more professional.

Thank you for joining Linda Raftree of Plan International USA and the New Tactics community for this conversation! Children have rights, including the right to be protected from violence, exploitation and abuse.  Yet, millions of children around the world suffer from threats at home, at school, in their communities, in institutions, while working, or when they are separated from their families.  To address this issue, new technology tools are being developed and adapted to support communities’ efforts to protect children.

Thank you for joining New Tactics, Rising Voices, Indigenous Tweets, and other practitioners for an online dialogue on Using Citizen Media Tools to Promote Under-Represented Languages*. The United Nations Education, Scientific, and Cultural Organisation (UNESCO) regularly publishes an Atlas documenting and mapping more than 2,500 global languages that are classified as vulnerable, endangered, or extinct. UNESCO also estimates that of the 6,000 current languages spoken today, more than half will be extinct by the start of the next century, adding that "with the disappearance of unwritten and undocumented languages, humanity will lose not only a cultural wealth, but also important ancestral knowledge embedded, in particular, in indigenous languages."

Thank you for joining the Tech for Transparency Team and New Tactics for a conversation on Using Technology to Promote Transparency. There has been an expanding and increasingly global movement of technology and digital media projects aimed at promoting government transparency, accountability, and public participation in political processes.  In Kenya, Mzalendo seeks to make information more accessible from the proceedings of the country’s parliament. In Jordan, Ishki aims to involve citizens in developing solutions to civic problems. Vota Inteligente in Chile promotes government transparency by informing Chilean citizens about corruption and policy debates through the use of social media.  The Technology for Transparency Network, a project of Rising Voices, is documenting these transparency projects to gain a better understanding of their current impact, obstacles, and future potential.

Thank you for joining New Tactics, MobileActive and other practitioners for an online dialogue on Using Mobile Phones for Citizen Media. Information is a powerful commodity for human rights defenders.  Receiving and sharing information is at the heart of human rights work.  Modern technology, such as the mobile phone, and the global distribution of the internet, provides new opportunities for citizens to actively participate in journalism.  The mobile phone is arguably the most accessible form of information communication technology and a popular tool for receiving and sharing information.