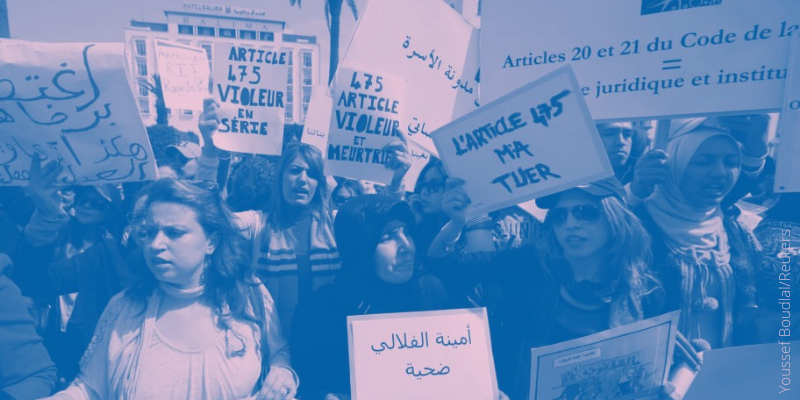 Our collective move toward online engagement has taken place in innumerable ways and fields of work - particularly during the COVID-19 pandemic. This has included advocacy for social justice issues. I promised in this final blog post on hashtag activism that I would share a campaign from Morocco. I learned about the #RIPAmina campaign through the New Tactics online tactics database.

This tactic from Morocco highlights a sixteen-day Twitter campaign “We Are All Amina Filali” with the hashtag #RIPAmina. This campaign began in 2012 and was led by women's rights leaders in Morocco. The campaign aimed to raise awareness about the tragic suicide of sixteen-year-old Amina Filali. Amina was only 15 when she was raped. The existing Moroccan criminal law (article 475) stated that raping an underage child is punishable by imprisonment. However, the penal code adds that sexual assault charges can be dropped if the perpetrator marries the survivor. Amina’s and her attacker’s families agreed on this “solution” and she was forced to marry her rapist. Many women’s rights activists in the country had long raised concerns about this law because it capitalizes on the shame and stigma of rape that victims and their families experience. By marrying the victim to the perpetrator, the families of the survivor protect their “honor”.

The #RIPAmina campaign received extensive media coverage and caught global attention. People around the world denounced the law and demanded justice and legal reform. Domestic activists used the hashtag to petition for the criminalization of child marriage, collecting more than 750,000 signatures in an online petition to deliver to Morocco’s parliament. They worked to protect underage girls from violence via the #RIPAmina campaign.

As the hashtag campaign gained traction, it exposed the Moroccan government’s complicity in such gender discrimination. This culminated in January 2014 when the Moroccan parliament amended the loophole that exempted rapists from punishment if they married the victim. The prison time was established to be between five to ten years, marking enhanced strictness from the parliament and the government towards sexual abuse and rape of minors. If you’d like to learn more about this campaign, here is the New Tactics summary.

The results of hashtag activism are contingent on their reach and long-term sustainability. Examples such as #RIPAmina make me hopeful for the potential of hashtag activism. At the same time, using a hashtag to display one’s knowledge about the world is not enough and can lead to performative activism. Creating, liking and sharing hashtags and resources on social media should be motivated by inclusivity, active participation and a desire to learn and do better.

Concerns that the usage of hashtags might be disingenuous are valid. Some supporters are not willing to take the next steps of action needed. I noted in my previous blog post that online activism can also run into issues of sustainability, being co-opted and/or diverting attention from core issues. I am concerned about the possibility of well-meaning hashtag campaigns being co-opted to spread misinformation and/or divert attention from the core issue. This is true even in offline conversations about women’s rights. I have lost count of the times that someone has said, “but what about men’s rights?” in important discussions of women’s safety and lives. Gender rights are for everyone and need everyone’s support, particularly from those who maintain the status quo.

And yet, activists are not in the dark about internet activism criticism. Most activists recognize their campaigns may be impacted by the short-lived nature of online activism, especially when it does not transfer into on-the-ground action. Consequently, many activists diversify their tactics to not rely on one method. In other words, they are utilizing various kinds of tactics with varying aims; different tactics are effective against different targets. Simultaneously, many activists hope that hashtags can mobilize people to affect real-world policies and attitudes. What are the elusive ingredients needed to make a lasting legacy of activism? This will be a constant question.

The shortcomings of hashtag activism that I have outlined serve as a good reminder of the need to always diversify our advocacy tactics. Diversifying our tactics helps us to innovate. This can even broaden the horizons of hashtag activism itself by using hashtags to mobilize people to affect real-world change. In the #RIPAmina case, local activists held sit-ins in Larache (where the court responsible for Amina's case is located) and in front of the Moroccan Parliament. They held signs and chanted slogans like “the law killed me” and “we are all Amina”. The hashtag attracted attention to the issue and in combination with the online petition and on-ground action, ultimately changed a national policy in Morocco.

At its very core, hashtag activism has a reserve of potential for human rights advocacy and mobilization such that it leaves a lasting legacy.

Change takes place one person at a time. You never know when one re-share or like can reach the attention of someone with the power and capacity to make a difference. Internet activism is dependent on going viral. So, if all you can do is reshare a Tweet or an Instagram post, there is value in that action and I encourage you to do so. We can collectively work towards change and healing online and offline.